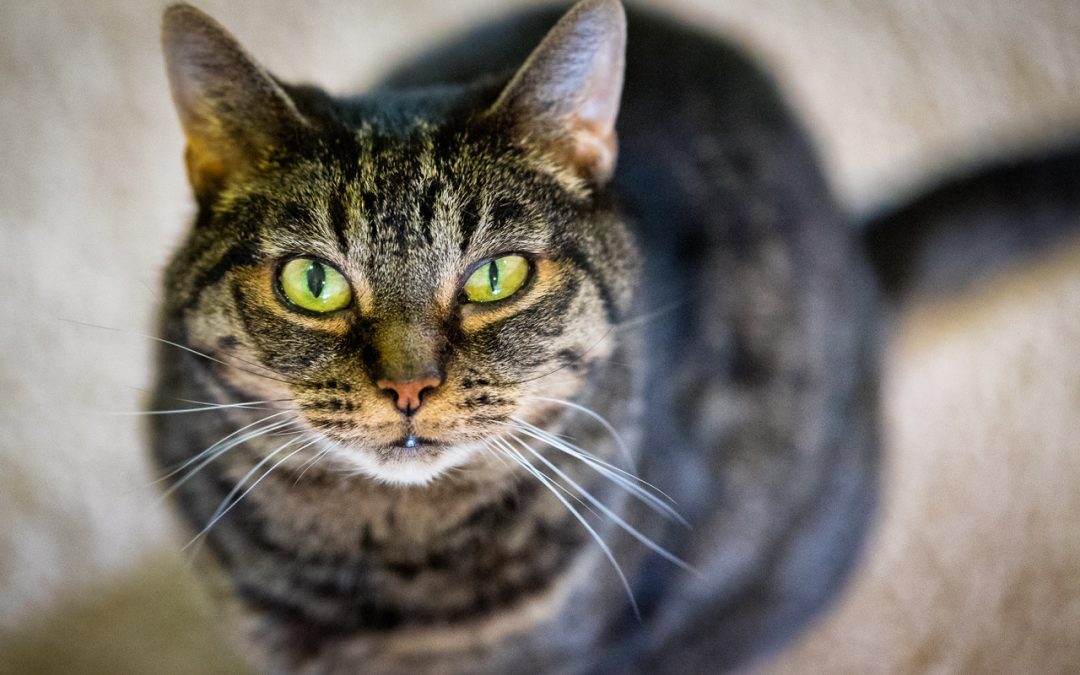 Zilla, a 17 year old Tabby, is our Patient of the Month.  Enjoy getting to know Zilla as shared by her family below:

When and how did you first meet? We were living in an apartment near Western and our neighbors had a tiny kitten. After a few months, they moved away and we noticed they didn’t take her with them so we decided to adopt her. After a few weeks her tummy started growing, and we soon realized she was pregnant. She ended up giving birth to 5 kittens in our closet one evening, and Zilla was one of them. We ended up keeping the mom, Bodhi, and one other kitten, Runty. Our sister took Zilla, and named her Godzilla to match with her other two kitties, Rodan and Mothra. It ended up not being a good fit, so we took her back and shortened her name to Zilla. And now she’s been a part of our family for 17 years.

What special tricks does your pet do? Zilla doesn’t really do any tricks, unless you consider being extra cute a talent. She is remarkable in another way though. She has several medical problems, and they seem to keep piling up, but she takes each one in stride and keeps hanging in there. She’s got kidney disease, chronic bladder infections, colitis, post-clipping alopecia, dizziness, and carpal hyperextension. But she’s still the boss of the house and still lets us know when it’s time to get up in the morning or time to feed her by utlizing her signature ear-piercing scream.

What does your pet mean to you?  We’re so grateful that it didn’t work out living with our sister, because Zilla has brought us so much joy. We lost our two dogs within the last couple of years. Since then, Zilla has sort of stepped into their role by interacting with us the most. She’s always close by, on our lap, or in the hallway outside the office when we’re working, or right outside the bedroom door at night. With her gimpy, tipsy walk and her bad foot, and her demanding meow, she makes us smile every day. (In fact, we’ve come up with a few nicknames for her like Tippy Canoe, Tipper Gore, and Limp Bizkit.)

Why is your pet the best? Zilla is the best because she’s a little bit famous at Northshore. She’s a troublsome patient, who’s been described as fractious. She sometimes even needs to wear a little hood when they try to get a urine sample or clip her nails. But everyone at Northshore gives her the love and respect the little old lady deserves and never seem to get frustrated with her poor behavior. She’s also very forgiving. We’ve had to medicate her many times over the last few years and it’s been a rather stressful activity for her and for us. But even when she was grumpy about being medicated, she seemed to forgive us immediately afterwards and want some love and affection. Now, in her really old age, she’s getting more mellow about medication time in the morning. She takes it easy on us now and takes her prednisone like a champ. She is a one of a kind kitty.